We went today to a Science Zone workshop Gooey Science today. Girls were reluctant to go (in a funny sort of mood, not sure why) but enjoyed it at the end. They did a few experiments there – girl’s favorite I think was Elephant’s toothpaste. There were a lot of ooohs and ahhs and general screeching, which always means success. At the end Mya excitedly told her dad “we were making foam from living creatures!!!” – I am not revealing any more, you have to go to their workshop! 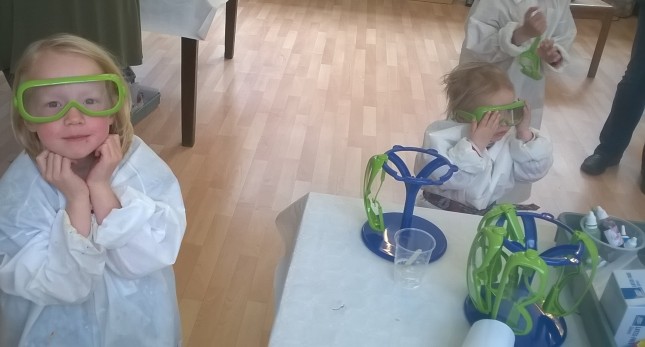 One of the experiments, however, reminded me something we made about a year ago, and I never actually published it on the blog, so here’s a copy of my old Facebook post.

We made this slime today.

We played with it for 2,5 hours! I had as much fun as Mya

We tried wrapping it around things

We were watching how gravity was stretching it

This is really streeeeeeetchy And rolly and really glittery! Glitter galore!

We were watching how gravity was stretching it. We tried wrapping it round things

And were experimenting how long it will stretch before breaking off

This is what we made it from. I didn’t give it to the toddler she still puts things in her mouth.

We put it in a empty butter spread plastic tub and played with it on many occasions. It is still playable, 1 year after.

It doesn’t stick at all, the only thing that stays on the hands is glitter and it’s difficult to wash to washing liquid off the hands – they keep being “soapy”

The only fail with this is it smells a lot with washing liquid, I wouldn’t give it to a younger child due to it being made with washing liquid – prolonged contact might be not good for the skin. I chose to use Formil Non-Bio washing liquid as most of the recipes of that type call for Borax or Liquid starch, and none of them appear to be available in UK to general public nowadays, so it was interesting doing the recipe with Borax at Science Zone to see the difference. The one we made at Gooey Science today was more rubbery (some of it even bounced!), easily tear-able and less stretchy and was sticking to the hand much more initially, but still was lots of fun.

What is your slime recipe? Please share your pictures and links!

Posted by cardboardkidz on April 16, 2016 in Pajamas Science, Uncategorized

We spent a few minutes constructing from packing peanuts and toothpicks (supervise your child – they are quite sharp). I was hoping to give a little lesson in maths – you know, count vertices, edges and faces – have a go with building different polyhedrons, or try to get Mya to work out how many toothpicks/peanuts she needs to build something and to compare with our set of Geometric solids. I brushed up on my geometry knowledge here – Math is Fun 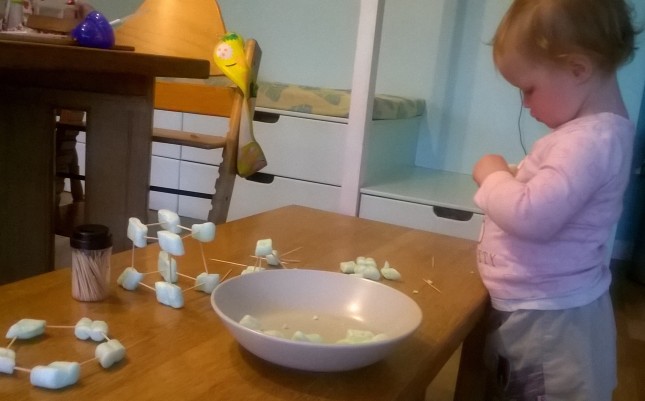 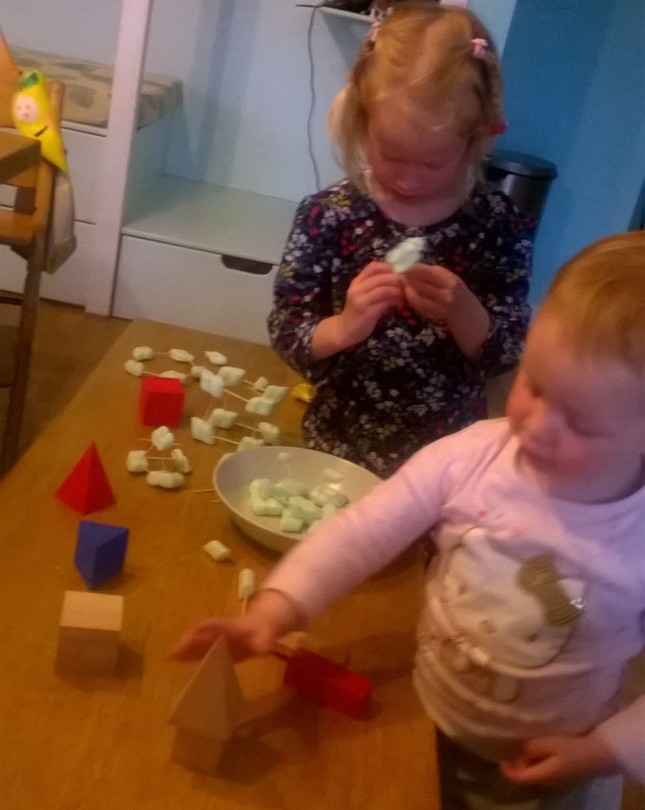 I was the only one who was thinking that way. Neva enjoyed breaking the packing peanuts apart and poking them with toothpicks (they make a great popping sound when poked or snapped), then asked me to build her a cow. Mya was building her own something which she refused to identify and wanted to pull apart the shapes that I’ve build for them.

Ah, well – all fun and games. Some other time maybe…

We’ve also made some rockets – expanding our knowledge on Space after visiting Science Museum in London yesterday. We visited exhibition Cosmonauts: Birth of the Space Age Mya was really captivated by a talk delivered by (alas) an actress, playing role of Soviet cosmonaut Valentina Tereshkova – the first woman in space. So today when building her rocket Mya asked to give her few pieces of rope “to tether Belle, Rapunzel and Hello Kitty” characters because they needed to go on a Space Walk, and she didn’t want them to float away into space.

Posted by cardboardkidz on April 10, 2016 in Crafts, Maths, Uncategorized

Most of the times I manage to do set up anything educational with my kids nowadays is happening either on holidays or weekends, and mostly in the mornings. When pajamas are still on and there’s no need to go anywhere fast.

Yesterday the day started slowly with lots of books and playing, then I remembered about a Density of Liquids Rainbow Jar experiment I wanted to do with girls. Found on Playdough to Plato

I couldn’t find some of the ingredients in UK (I think the blog is American), so I substituted them with what I could find. Some thing worked, some didn’t but at the end it turned out not so bad! 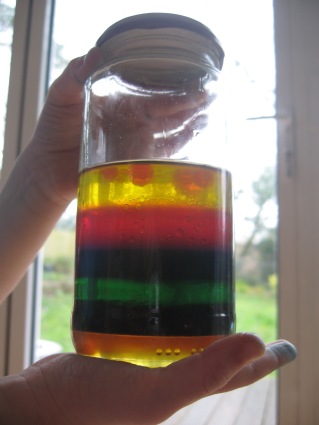 Here is what we used and how we started the experiment

I put out all of the supplies and scales and explained that we are going to do a little experiment and make a Rainbow Jar (I showed her the picture, so she was interested in the end result) 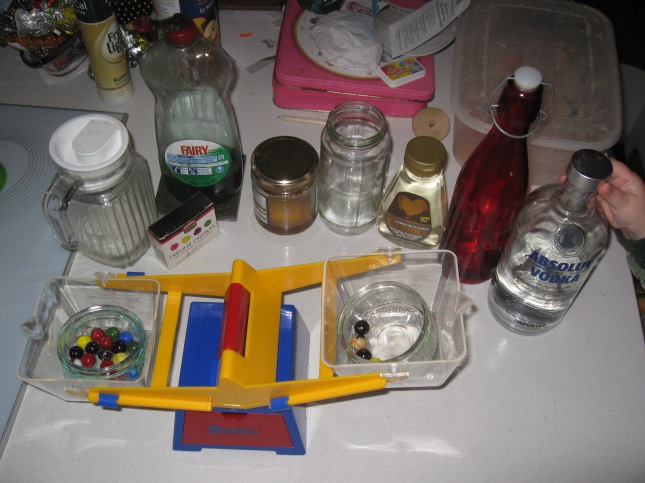 I gave Mya 2 jars with only a few marbles in one and full of marbles in the other and asked what she can tell me about them. She said that one had less marbles and other had more. We weighted them and came to conclusion that the one with more marbles was heavier.

I explained that everything is made from molecules – just like these marbles, but so tiny that you can’t see them. All our liquids that we are going to use are made of molecules too, and some of them have more molecules in them so they are heavier than the others, and the heaviest things will stay at the bottom. 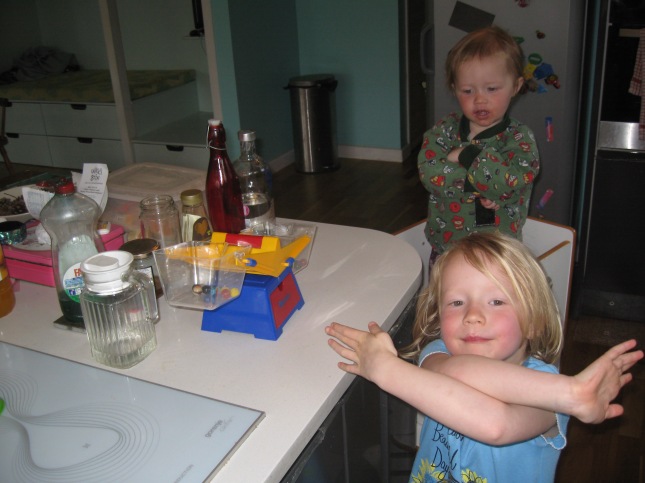 We started with honey (no measures of how much of anything you should use – just enough to have a nice thick layer). Then we colored Carob syrup purple and poured that in – carefully, right in the middle. It was difficult for Mya not to pour it down the sides so I had to guide her hand (in pouring most of the liquids, as I didn’t want to spoil the  result of experiment and put her off the future ones). She wasn’t very happy with that. I don’t know why I didn’t think of using a funnel.. Duh!

Next – in went dishwasher liquid, followed by some water in colored blue. After water- we poured in some Olive oil and last went in Vodka colored in red. You’re not supposed to pour that one down the middle, but instead drop it down the sides with a dropper. Mya tried it first, but it was going everywhere, so I took this one over as well. This one didn’t go well – no matter how I tried – it went under the layer of oil and didn’t want to stay on top. My guess is – it wasn’t a good substitute for Rubbing alcohol, and was probably heavier than needed, or we weren’t careful enough pouring it in. Nonetheless – it turned out not so bad, and Mya has a basic understanding of molecules.

Be careful not to shake the jar – this will spoil the carefully arranged layers.

During the experiment Mya enjoyed mixing food coloring in and pouring liquids, Neva (2,3) enjoyed opening all the bottles, pouring marbles from one container into another, eating cheese and anything else I put on her plate for distraction and singing Rainbow song we made up. She wasn’t bothered by the rainbow jar. She wanted to drink Vodka…

I put the bottle back into the cupboard. I might need it for cleaning up courage….

Posted by cardboardkidz on April 6, 2016 in Pajamas Science, Uncategorized

Sunny spring day – and they are indoors!

We had a busy day today. It was bright and sunny, but for some reason – no one wanted to go outside today. Too busy doing other things.

There was a bit of playing with bubble dough made from dishwasher liquid and corn flour (if I remember it correctly it was from here Creative Playhouse Bubble Dough although ours was sticky and messy, more like Gak, but still soft and silky to the touch). I used red dishwasher liquid, which made the dough pink. We had this stored for ages – it’s still good. I do like food – safe slimes and goops, but these spoil very quickly and you have to store them in the fridge and most of them don’t last more than few weeks – this is when I remember that I still have them :-)So I just have to watch smaller person closely. 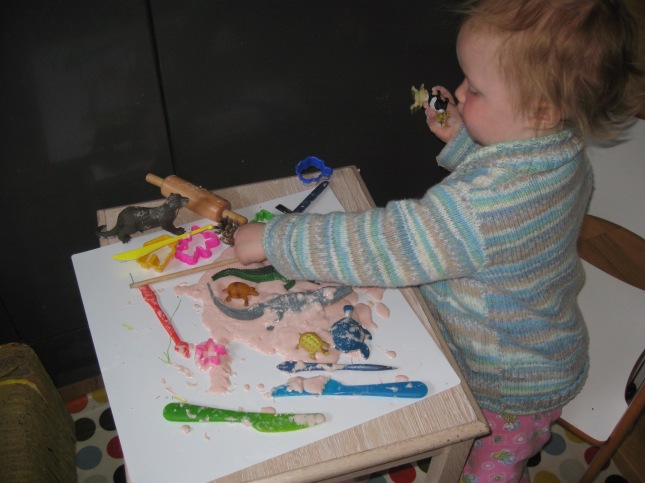 Girls enjoyed playing with it: first tried to roll it with a rolling pin, then tried cookie cutters, all of which didn’t work, cutting with a knife was a success, then reptiles came to play with a random otter and a panda – they were leaving wonderful foot prints which we talked about and tried to make prints with other things. Meanwhile reptiles sunk in and we had a giggle trying to prise them out! Tidying after that was fun – a bit of water makes dough bubble, so everything was covered in soft fragrant foam. I think we’ll try this one next: Even better Bubble Dough

Then it was time for a bit of writing practice. Mya needs to work on her writing which is her weak point at the moment, and is unwilling to do any wipe-erase or other practise books I bought for her, not even this amazing one (Pencil Control, similar one here First Pencil Practice). So I have to be very creative with pencil control exersises and teaching the correct way of writing (she even rejects Colouring books!). Teacher from Mya’s school kindly printed and laminated some big cursive letters for her, so I layed them out for her to discover with a box of Wikki Stix – she couldn’t walk by!

As you can see though – she didn’t pactice for long (at least something, huh?) and started to create with them. For the smaller person I layed out shapes mats to trace (on the left) and she did a fairly reasonable triangle and a circle, then just started playing with stix. which was ok.

And some destruction of audio tapes (yes, I was holding on to them – just for this occasion) after an explanation about storage of music, files and videos and how it progressed over the years. 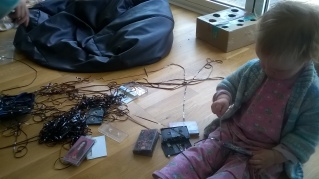 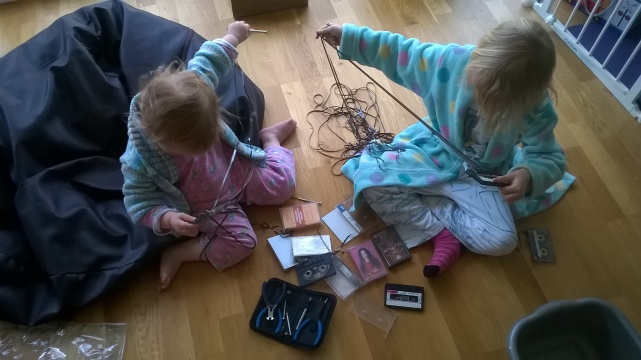 How to destroy an Audio Tape

Then we made some muffins in Easter Shapes silicon mould, which I couldn’t get out of but they were still tasty (I cheated and used Madeira Cake mix)

Then I finally hearded everyone outside and we had a lovely afternoon climbing, sliding, trampolining, riding toys, making toys mucky, wahing toys and cloud-watching.

Posted by cardboardkidz on April 2, 2016 in literacy and writing