Idea for younger kids who is interested in how our body works. My kids are always interested in that subject and we have numerous books about it including the Usborn one with flaps Look inside your Body. I have seen this one translated into Russian, so would be interesting to get one for cross-reference.

Recently kids got hooked up on CBBC “Operation Ouch”. Here is an accidental study. Neva asked me to make fresh batch of playdough (I think she just wanted to play with it), which I did, and she didn’t want to colour it at the moment it should have been, but asked if she can mix the food colouring at the end. She chose Red. The result looked like human tissue covered in blood – she loved it!

She said she wanted to do a surgery on “Jude”, pointing at playdough. So I asked which part of the body is surgery for, and she decided – lungs, so I opened a page in the book we were reading earlier on the lungs page and we made lungs, then after a while of prodding and doing surgery with kitchen utensils she wanted to do heart, so we opened the heart page and I helped her to make one and also gave her some blue food colouring for the blood in the veins.

She was busy “doing her surgery” for about an hour if not more, until Mya finished her book and started interfering 😆 She has returned to do “Jude surgery” quite a few times since then. We talked about anaesthesia as well, because our “patient” needed to be put under 😆 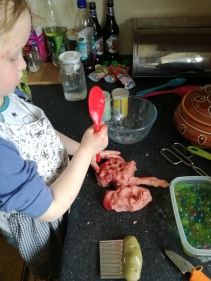 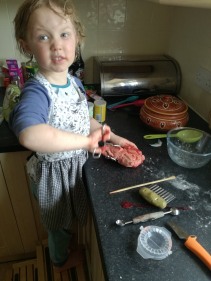 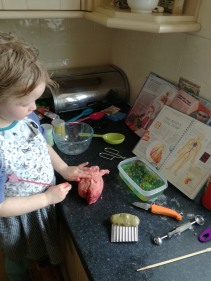 Making heart out of playdough