The brightest dress she owns! 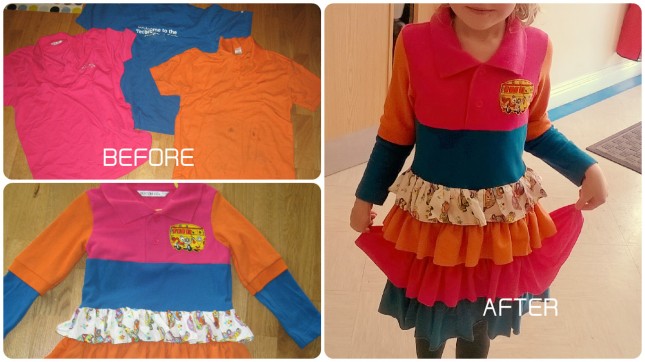 I have accepted the challenge.

I picked a Polo shirt with the smallest collar to use as my base for the dress. I planned to make the top out of it, then attach all the other bits to it – skirt, sleeves. I turned it inside-out and traced the outlines of my t-shirt template onto it (see my previous post on how to make easy template). 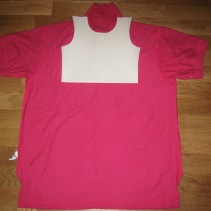 I cut it out but unfortunately the length of the top was finishing just where all the logo’s on the shirt were. The logos were embroidered so they wouldn’t have behaved well in a seam or with another applique over them – and I didn’t want any logo’s on the dress. So I cut the strip with the logos off on the front and back of the top, then traced the cut-off strip on the sleeves of the blue polo shirt and stitched it to the top of the dress – this is how it happened to be two coloured instead of one colour. 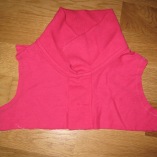 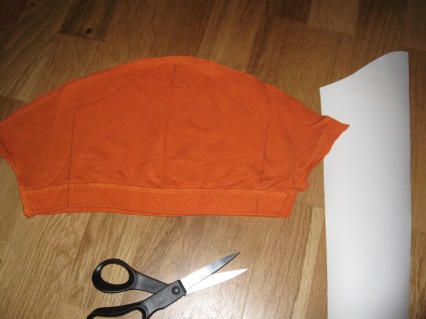 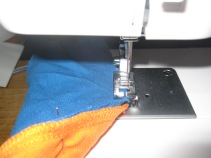 Then I measured the waist width and cut out a rectangle for underskirt from an orange Polo shirt – this is where all the ruffles would be attached. I had quite a few orange shirts – they were used for uniform, logos were cut-out, and fronts were heavily stained and unusable, but the backs were perfectly fine, so I used a few of these on this project.

To make ruffles a bit puffier I used 3 widths of a T-shirt for each colour. I used a straight stitch on my machine then gathered it by pulling one top side of the thread as I did here, but I divided the width in two and pulled from both sides to avoid putting too much stress on the thread, so it doesn’t break when gathering.

I then attached the first ruffle to the top of the skirt rectangle, and pinned the skirt to the top of the dress. I used zig-zag stitch to attach the skirt and also a straight stitch just to make sure. I was helping myself with a screwdriver to flatten the ruffles and move the material along because it was stalling sometimes and not moving along in the machine. 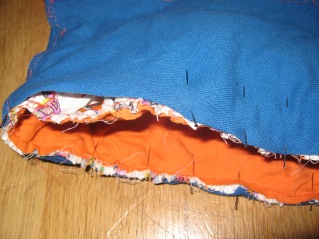 I wanted ruffles to gradually get longer so to each new tier I added 1cm in width. I then attached ruffles to the skirt to make sure that the top of each ruffle was about 1cm under the bottom of the top ruffle.AS you can see from the picture I was helping myself along with a screwdriver to flatten the material and help it move in the machine when doing ruffles, it was stalling a bit.

I only hemmed the ruffles with cars as it was not a knit so it was fraying at the bottom, the rest I left as they were – these knits don’t fray at all.

My daughter likes cars and trains a lot, so I bought a piece of fabric with cars which I used for the top ruffle. Then I found this nice applique of a camper van and I hand- stitched it to the top of the dress.

The dress was ready. One happy little girl wore it for a few days in a row after school!

Happy girl in a car-dress

Posted by cardboardkidz on May 17, 2016 in Re-purposing and Re-fashion